In 2005 I managed to buy a rare only 55.000 miles driven 354 engine from a parts car my friend bought for his '57 300C project. The parts car was complete and fully running. I got also the original seats in better shape to replace the ones my car had. Parts car's seats had the original upholstery which can be used as a model when they're refurbished with exact color combination.

Some people just can't resist the temptation to wipe a dusty car or write or draw something on it. These pics above were taken in May 2009 - almost five years after the previous pics - and previous wash! Besides getting all dusty again, someone had also broken the passenger side rear light lens during the winter 2008-2009.

We pulled the car out of the friend's garage in 2009 and as it was cloudy and rainy day when we moved and washed the car in 2004, this probably was the very first time in sunlight since 1991 for the Windsor! After a quick wash we moved the car to our own home garage. The hopes were high to get the project finished during the next few years.

Checking the brakes at our driveway resulted a surprise. Previous owner had removed everything inside the rear brake drums. I guess he was going to make a brake overhaul back in the early 1990's but never had a chance to finish the work and all the essential parts are missing.

After going through all of the stuff that was inside or near the car when it was rescued in 2004, we were able to find some of the missing parts. Some of the rusty parts were even dug up from a metal trash pit behind the locomotive garage after getting a hint that they might have ended up there. First pic above shows everything what was left from the rear brakes!

"Something old, something new, something borrowed, something..." - original alternator had been under dripping water for a decade but fortunately the one from the replacement engine is better. We also got drive shaft and some of the missing brake parts from a friend and he also borrowed his extra power steering pump for us to get the Windsor on the road again. If someone has a power steering pump for sale, let me know. Later on I managed to buy rest of the brake parts from a Swedish junkyard and found a rebuilt starter from eBay

New stuff waiting to be assembled. Brake overhaul kit, shocks, some gaskets and some other parts and some paints and cleaners.

Good start with the restoration project was paused in 2012 after our home garage got into a worse condition and became a restoration object itself! We moved the project to another garage we rented from "the old sausage factory" of Pieksämäki.

During the years I have been getting all kinds of parts and stuff from eBay whenever I have found something the Windsor is missing. In summer of 2014 I managed to find original upholstery materials for the seats and ordered a wiring harness from Greg Leggatt. The new emblems are made by George Laurie.

There was not much progress because of work and other stuff. The bumpers, some moldings and door handles were re-chromed in 2014 and 2015. Also rust repairs for the trunk floor and front floor corners took place. In early 2015 we had to move to another garage which was not so good for restoration work so everything got once again paused. 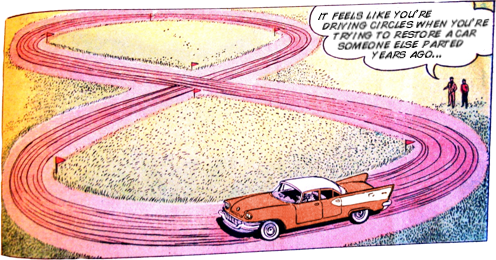 since this car was on the road with it's own power.